The Sistine Chapel in the Vatican: the Creation of the sun, the moon and the plants 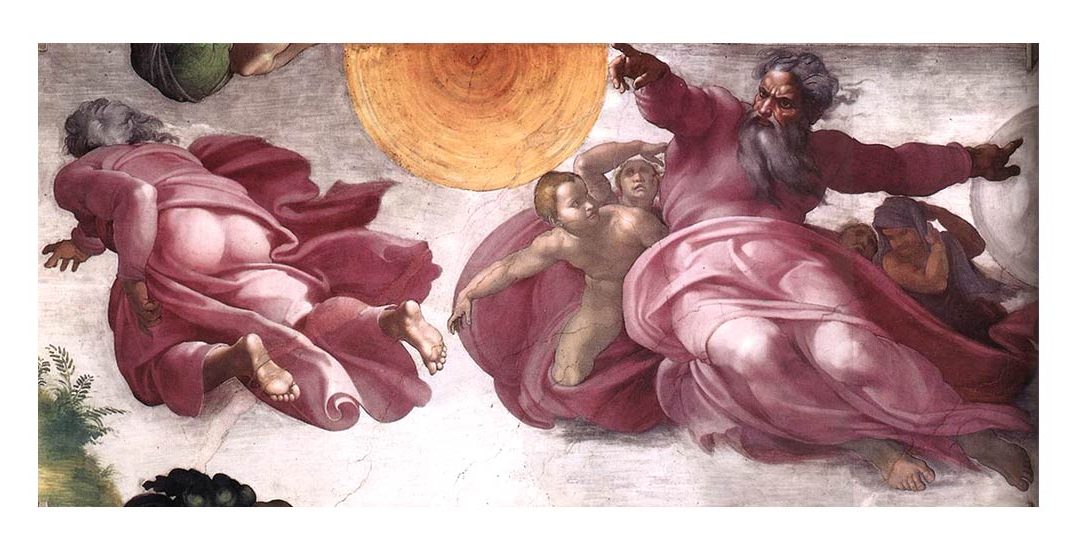 The Sistine Chapel in the Vatican Museums

Here we are with a new post in our series of glimpses of the Sistine Chapel in the Vatican Museums. For our third post, we’re focusing on the biblical scene about the creation of the stars and the plants. This fresco is part of the second section that Michelangelo completed during the second stage of work, i.e. after autumn of 1511.

As we can see easily, the figures are larger than those in the Great Flood, which we focused on earlier; Michelangelo painted the frescoes in seven working days.

A closer look to Michelangelo’s work

This depiction is part of the group of three scenes about the Creation of the World. In the biblical order, the separation of land from earth is the second story, but Michelangelo took the liberty of reversing them and putting it in this scene. He put two separate moments of creation together in a single scene; on the left is the birth of the plant world and the creation of the sun and moon are next to it. One of the most powerful frescoes in the Sistine Chapel, its spare depiction makes a great visual impact. God is depicted twice from completely different perspectives: using a front and back view, Michelangelo lets us admire the image from several vantage points, almost like a statue.

The figure to the right is exceptionally powerful, an expression of Michelangelo’s distinctive “terribilità” – awesomeness or emotional intensity — with His amazing stern, frowning gaze as he throws open His powerful arms to create the sun and the moon. On the left, He is busy creating the plant world and has His back to us and His right index giving bringing plants into creation. The two figures are linked by a powerful wind that pushes against both of their clothes, billowing the garments and ruffling His beard and hair. Though they are not completely symmetrical, the two halves complement each other perfectly.

Let us look more closely for a moment at the figure of the Lord. God making the plant world is shown from behind and strongly foreshortened as if He were piercing the background of the painting; as dynamic and powerful seems to us today, this position was much criticized in Michelangelo’s day. A representation of the Creator showing us His backside and soles of His feet was considered quite disrespectful; few realized what a magnificent composition Michelangelo had achieved because they were so unfairly shocked such a completely innovative perspective.

For the figure on the right, the Creator God of the sun and the moon, Michelangelo returned to the traditional iconography of God as an elderly white-bearded man, though he gives Him a tempestuous power. God’s face and that of the putto in front of him appear as if struck by a beam of light, making them all the more expressive, and His hand pointing towards the sun is exceptionally natural.

The Sistine Chapel in the Vatican: the color palette

Finally, let’s talk about colours. The color palette is based on the purple of the Creator’s robe, also used in other scenes of the Creation of the World. Michelangelo also added cooler colors, grays and very light blues; the sun in the center is the only exception, shown as a golden disk, and the moon is a pearly ball.

Michelangelo’s genius, as seen in the Sistine Chapel, will never cease to impress, amaze, and thrill. No one can remain unaffected by them and passing up the chance to see them would be a genuine pity!